Below is a piece from the local newspaper, the Bray People featuring our Squad gymnasts who recently competed at the South Dublin Level 2-6 and 6-9 Plus Regional All Around competition. 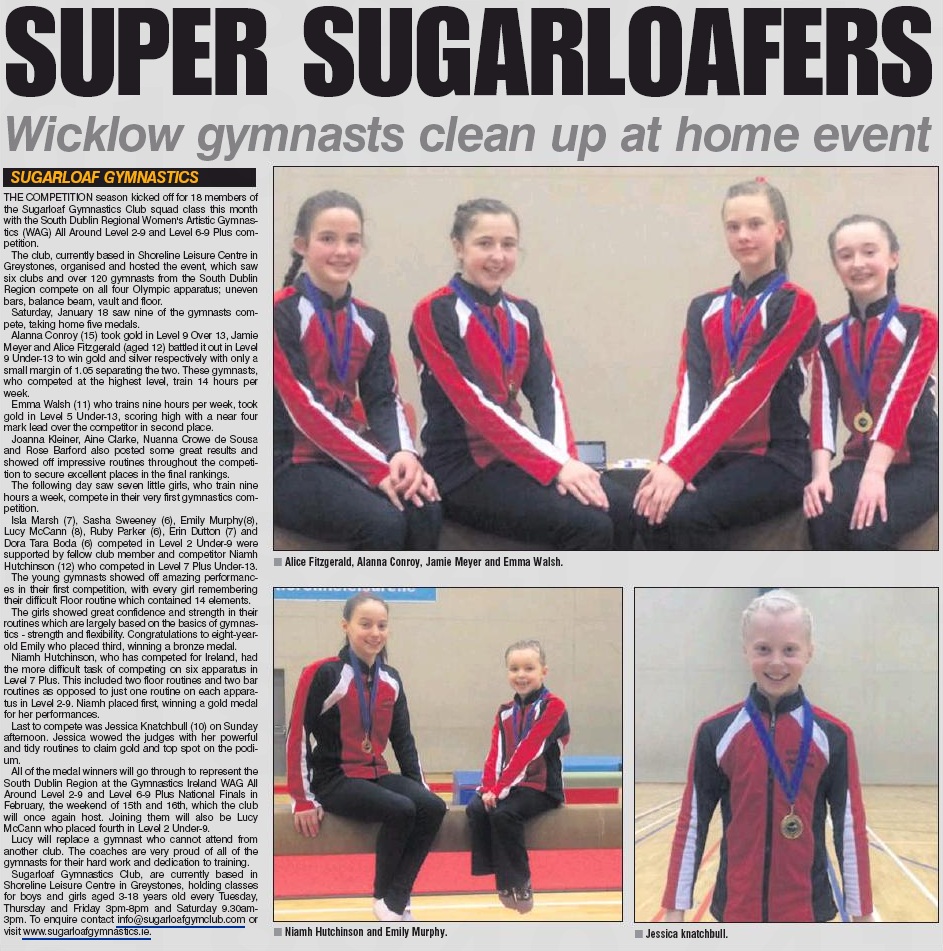 The competition season kicked off for 18 members of the Sugarloaf Gymnastics Club Squad class this month with the South Dublin Regional Women’s Artistic Gymnastics (WAG) All Around Level 2-9 and Level 6-9 Plus competition. The Club, currently based in Shoreline Leisure Centre in Greystones organized and hosted the event, which saw 6 clubs and over 120 gymnasts from the South Dublin Region compete on all four Olympic apparatus; Uneven Bars, Balance Beam, Vault and Floor. Saturday 18th January saw nine of the gymnasts compete, taking home 5 medals. Alanna Conroy (15) took gold in Level 9 Over 13, Jamie Meyer and Alice Fitzgerald (aged 12) battled it out in Level 9 Under 13 to win gold and silver respectively with only a small margin of 1.05 separating the two. These gymnasts, who competed at the highest level, train 14 hours per week.  Emma Walsh (11) who trains 9 hours per week, took gold in Level 5 Under 13, scoring high with a near 4 mark lead over the competitor in second place.  Joanna Kleiner, Aine Clarke, Nuanna Crowe de Sousa and Rose Barford also posted some great results and showed off impressive routines throughout the competition to secure excellent places in the final rankings.

Sunday 19th January saw seven little girls who train 9 hours a week, compete in their very first gymnastics competition. Isla Marsh (7), Sasha Sweeney (6), Emily Murphy(8), Lucy McCann (8), Ruby Parker (6), Erin Dutton (7) and Dora Tara Boda (6) competed in Level 2 Under 9 were supported by fellow club member and competitor Niamh Hutchinson (12) who competed in Level 7 Plus Under 13. The young gymnasts showed off amazing performances in their first competition, with every girl remembering their difficult Floor routine which contained 14 elements. The girls showed great confidence and strength in their routines which are largely based on the basics of gymnastics – strength and flexibility. Congratulations to 8 year old Emily who placed third, winning a bronze medal.

Niamh Hutchinson, who has competed for Ireland, had the more difficult task of competing on 6 apparatus in Level 7 Plus. This included 2 floor routines and 2 bar routines as opposed to just one routine on each apparatus in Level 2-9. Niamh placed first, winning a gold medal for her performances.

Last to compete was Jessica Knatchbull (10) on Sunday afternoon. Jessica wowed the judges with her powerful and tidy routines to claim gold and top spot on the podium.

All of the medal winners will go through to represent the South Dublin Region at the Gymnastics Ireland WAG All Around Level 2-9 and Level 6-9 Plus National Finals in February, the weekend of 15th and 16th, which the club will once again host. Joining them will also be Lucy McCann who placed fourth in Level 2 Under 9. Lucy will replace a gymnast who cannot attend from another club. The coaches are very proud of all of the gymnasts for their hard work and dedication to training.